The store will not work correctly in the case when cookies are disabled.

Cookies help us deliver our services. By using our services, you agree to our use of cookies. Learn more

Letterboxes Stand The Test of Time 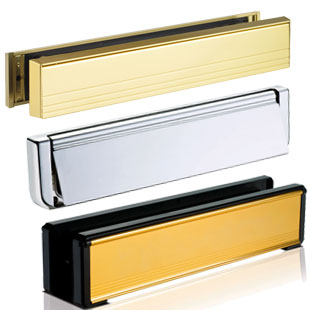 Letterboxes are one of the most important features of your home exterior – that slot in the door that allows the post to come in, but keeps drafts and thieves out!

Letterboxes are a highly functional piece of hardware, but also one that now comes with a wonderful choice of finishes and effects.

When did we start using letterboxes?

At one time, the type of homes that would receive mail would generally need no introduction to the local postal service. Letters addressed to Rt Hon Bertie Cartwright of Sussex would be highly likely to find their recipient! In those days, the mail courier would have called at the service entrance of the property to hand over the post in person.

As the population grew, and more people had access to education, the number of homes and the amount of mail increased. From the early 1700's, people started putting numbers on their houses to help postal workers and visitors to find them. These were initially rather random and arbitrary, as regulation of the street numbering system came in the Metropolitan Management Act of 1855.

Clearly, personal delivery of mail was becoming far too time-consuming. So, in 1849, the Royal Mail announced that every home should install their own letterbox to receive post. This was initially aimed at city properties but was eventually rolled out to rural areas too. Incidentally, before that, the term letterbox was used solely to indicate a wall box or receptacle near a Post Office, used to collect out-going mail.

Guidelines for letterbox size and height

Unlike the US, where properties tended to have longer driveways, a slot in the door has become common practice in Britain, rather than a free-standing mailbox.

The principle of letterbox placement was always that it should be positioned at a height to make it easy for the postman (or woman) to quickly pass mail through. In its earliest days, it could be compact, as handwritten missives were limited in size.

As the decades went on, post grew in quantity and size, including the advent of larger envelopes and small packages. Homeowners also became creative with their placement of letterboxes, including tucking them out of sight in a low position at their front door.
For this reason, the regulations on house letterboxes in the UK are regularly reviewed. The UK has not formally followed EU standards on dimensions, but items widely available have tended to match the European standard EN 13724:2002 Postal services – Apertures of private letter boxes and letter plates, requirements and test standards.

More recently, the positioning of letterboxes has come under the spotlight. New UK laws banning low-level letterboxes (that cause backaches and make postal workers more susceptible to dog bites) are expected in 2020 [https://www.bbc.co.uk/news/uk-politics-46895002].

Security has become a crucial consideration, which has led to an emphasis on allowing items to pass cleanly inside, but hands and hooking devices are limited from entering. The need for energy efficiency has also led letterbox manufacturers to create snug fitting and insulated options to make sure no heat escapes via this important front door portal.

Meanwhile, on the outside, letterboxes and letter plates have become a thing of beauty. The materials and design features used have become more ornate to make this practical item attractive and to complement other door decor, such as door knockers and door handles.

The humble letterbox is a status symbol that Rt Hon Bertie Cartwright of Sussex would have been proud to own!