The store will not work correctly in the case when cookies are disabled.

Cookies help us deliver our services. By using our services, you agree to our use of cookies. Learn more

The Fullex door handle with snib models are quite unique and many older doors still perform perfectly well with many years of use. Fullex is a famous brand for the split spindle lock where two spindles meet in the middle, but operate the handles independently. This had the advantage of keeping the door locked from the outside without the use of the key. The split spindle arrangement has always been used on the 68pz upvc door handles. 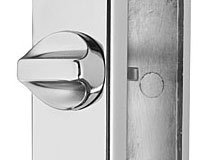 The Fullex range then went on to incorporate a snib latch.  It was felt that the split spindle  arrangement was more secure but customers could find themselves locked out if the door closed behind them unintentionally. Many people would identify with this feature as being similar to a rim cylinder latch where the latch can be held back leaving the door open. This was quite difficult to do with upvc door handles in the early days until Fullex incorporated one to most of their multipoint locks and handles. The Fullex door handle with snib would show itself as a little round button on the internal backplate of the upvc door handle. When you open the door and with the handle in the down position you can then turn the snib to hold the latch back inside the door. The door then remains opens allowing you to leave the door open while attending to matters in the front garden, as an example. 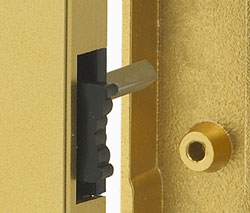 Today's replacement upvc door handles are a little different as most don't use the snib feature but the Fullex door handle with snib still remains on a smaller scale and with a slightly different design. This 'new' design incorporates a snib from the side of the handle and is a two part assembly. Sliding the snib up or down will rotate the spindle in exactly the same way that the button type did when mounted on the front plate.